“Comedy For Cancer” Raises Funds and Awareness Through Laughter

Last night, I went to Tivoli Theatre in Downers Grove to attend “Comedy For Cancer”. Nine years prior at this very location, I met Kevin Bacon and had a brief conversation with him about Friday the 13th. This has nothing to do with last night, I just like to mention it when I can. 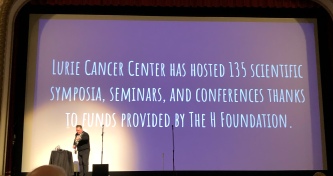 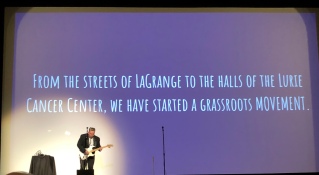 “Comedy For Cancer” was a night of laughter put on by The H Foundation as one of their many ways to raise funds for cancer research. The night consisted of comedy from Pete McMurray, Paul Farahvar, Patti Vasquez, and Tim Cavanagh. The performances were topped off with a performance by Jim Peterik, as he sang “Eye of the Tiger” the famed song he co-wrote with former Survivor band mate, Frankie Sullivan.

Other highlights of the night included Peterik and Cavanagh re-writing the lyrics to Peterik’s hit song “Vehicle” that he performs with his band, The Ides of March. There was also the surprise of an Andy’s Frozen Custard vendor giving out scoops of cookies and cream. Cavanagh shared on Facebook, “Thank you to all who attended last night’s H Foundation Comedy for Cancer show at the Tivoli! What a great audience! It was a real pleasure to share the stage with so many talented people. Special thanks to Jim Peterik for joining me to sing our duet, “Vehicle Man,” my parody of his classic hit. Continue to support the great work being done by the H Foundation, raising money to support basic science cancer research at the Robert H. Lurie Comprehensive Cancer Center of Northwestern U. Your generosity is appreciated beyond words!” 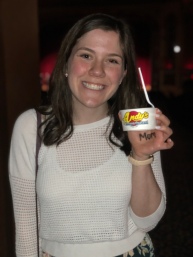 While the night was entertaining and the food was delicious, the important takeaway was really seeing how cancer impacts the life of practically every individual. Each attendee was encouraged to write on their hand the name/relationship of someone they know who has struggled with cancer. This visual representation of the disease’s impact was emotional, but gave us all something to connect on and think about. If you have some time, please visit The H Foundation‘s website to learn more about their work and their mission.