Anyone who knows me, knows that I love Alan Thicke. For years, he has been one of my favorite actors. This dates back to when I was around 6 or 7 and discovered “Growing Pains” reruns on ABC Family. Since then, I’ve become enamored with his career; mainly his comedic impact on the entertainment industry. In recent years, the name Alan Thicke has become iconic in its own right, especially since AT had begun playing himself on a variety of TV shows (e.g. “How I Met Your Mother” and most recently “This Is Us.”) He mentioned in a panel in November 2016 (more on that later) that he has become a caricature of himself, as he was getting booked for gigs simply to play “Alan Thicke.”

I rediscovered my love of “Growing Pains” in high school and learned a lot about Thicke’s career during this time. Not only was he one of America’s favorite sitcom fathers, but he was a talented author and musician, who provided the soundtrack to my senior year winter break. A few months later, I attended Norby Walter’s Night of 100 Stars Academy Awards party in Los Angeles, and had the opportunity to meet Thicke. He was very kind and agreed to take a photo with me (and a repeat photo when the first one didn’t turn out well.) And later that year, I visited his home country of Canada and of course had to tell him about it.

In January 2016, I took another trip to Los Angeles and got to do one of my favorite things in the world – tour Warner Bros. Studios. While riding through the backlot, one of of exterior homes caught my attention, though the color seemed off. “Is that the Seaver house from “Growing Pains?” I asked the tour guide. “Yeah, good eye,” he said. I then asked if we could stop to get pictures outside of it, and he said that I was the first person to make that request. Standing outside the Seaver house the way they did in the opening credits brought out a giddiness in me that I probably haven’t exuded since toddlerhood. Again, naturally, I had to let Alan know about this experience. 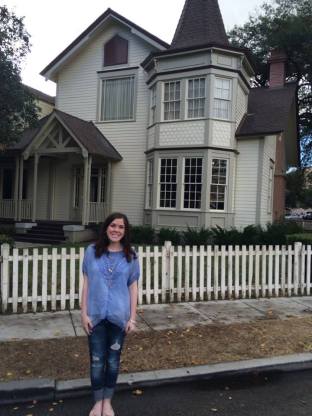 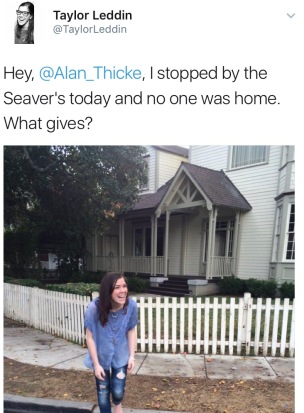 In November 2016, I had the awesome opportunity of hanging out with him, Tracey Gold, and Jeremy Miller at a throwback convention in Chicago called ‘Rewind’ (it should be acknowledged that the whole reason I knew about the event is because I saw Alan tweet about it this past summer.) While working as a social media coordinator for the event, I attempted to capture as many moments as possible. One of those iconic moments was the fact that three of the Seavers were reunited. Getting this shot of the three of them was one of my favorite parts of the weekend (and one of the highlights of my life as “GP” is one of my all-time favorite shows.) And, sitting in on the Seaver Q&A panel was an amazing thing to watch unfold.

The day after taking this photo*, I stopped into the hotel restaurant to grab a quick bagel with some friends before going into the convention for the day. Alan was sitting at the table behind us, and as I got up to leave, we exchanged a quick smile. I was so saddened to hear of his passing, and will continue to appreciate his work in the years to come. If you haven’t already, do yourself a favor by reading his Huffington Post column or by watching his Boomerologist videos, his dry sense of humor was something that pulled me out of the worst of moods, and his list of entertainment (and charitable) accolades is something to be admired. Alan Thicke was one of my favorite entertainers on this planet, and he is most definitely missed.

*I shot that photo for social media use as a “Growing Pains” mini-reunion. Unbeknownst to all of us, that would be the last “Growing Pains” reunion Thicke would partake in. That being the case, news outlets across the country picked up this photo to coincide with the story of his passing. I am beyond humbled and honored to have taken this picture, as “Growing Pains” means so much to me. 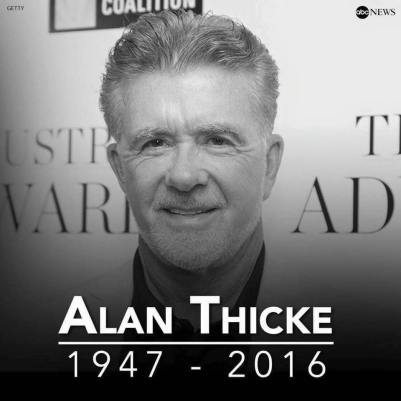