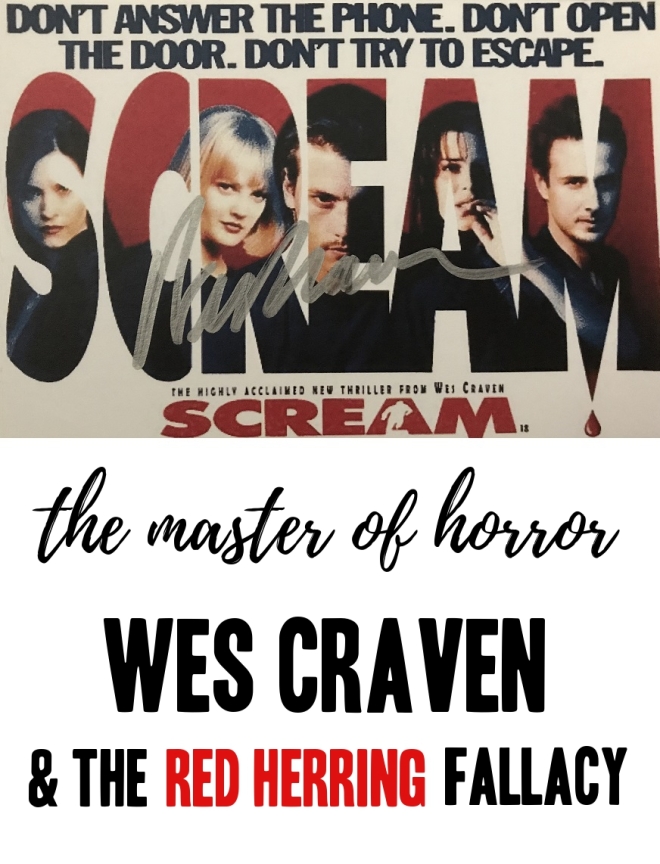 The Master of Horror: Wes Craven & the Red Herring Fallacy

In 2015, the cinematic world lost a key player with the death of horror director, Wes Craven. Craven, best known for directing A Nightmare on Elm Street (1984) and the Scream franchise, died at the age of 76 after a battle with brain cancer.

The Internet was flooded was outpourings of sadness over Craven’s death; with fans and former co-workers expressing their grief on Twitter.

Craven is often credited for re-vitalizing the horror genre with his 1996 release, Scream. The film inspired a surge in modern horror which eventually spiraled into the age of horror-remakes.

The director has always been highly praised by those who have worked with him. Dane Farwell, the stuntman for Scream’s “Ghostface”, stated, “The best part of working on the Scream films is working with Wes Craven and the cast and crew. We all get along together so well it doesn’t seem like work”.

Craven was also notorious for being great with fans. He would often interact with fans via his website FAQ forum and he was very active on Twitter. In addition, he was very good with responding to fan mail, generously providing fans with autographed photos.

Hollywood lost an icon, but it is important to remember the great impact that Craven had on the horror genre. With Halloween just around the corner, it is the perfect time to appreciate some of his films.

One of the first items I remember learning as a communication major was the concept of a red herring fallacy. Basically, this is when someone uses a deliberate distraction to keep the eyes off of the true issue at hand.

Though I wasn’t quizzed on the meaning of red herring until this point in my life, I was actually first introduced to the concept at the age of 10 when I saw Scream for the very first time. This was because director Wes Craven, one of the masters of fear, was a genius when conveying the idea of a red herring. [It must be noted that Scream would be nothing without the brilliance of Kevin Williamson’s writing and creation of this story.]

And, considering Scream was intended as a spoof, the red herring fallacy was utilized throughout the whole film to inform the audience that, as Jamie Kennedy’s Randy points out, “there’s a formula to it! A very simple formula: everybody’s a suspect!”

This keeps the audience guessing and in suspense during every second of the one hour and 52 minutes that the story is told. However, the late horror great not only used clues to lay the foundation for the climactic ending, he also used symbolism to further the notion of a red herring itself.

Throughout the entire film, it is easy for a viewer to believe that Billy Loomis, played by Skeet Ulrich, is the killer. This assumption is briefly sedated when, after he and Sidney (Neve Campbell) share an intimate moment together, he himself gets stabbed by the masked maniac that is Ghostface.

Moments before Ghostface appears, Sidney is exuding skepticism about her boyfriend’s claimed innocence. During this conversation, the camera pans to a shot of a nightstand featuring a telephone and a hairbrush. The telephone is red, the brush is used for hair (her), and a phone rings.

This shot is, at the same time, both a subtle and blatant use of symbolism. The viewer is so consumed with thinking that Billy will be revealed as the killer, that they’re likely to miss the shot’s purpose.

It’s a minuscule part of the movie, but speaks to the brilliance that Wes Craven had in his film-making. He gets to the basic principles of storytelling and uses these principles to shake the audience to their core.

Scream will be showing at Hollywood Blvd. in Woodridge on October 17, and at Whiskey Business in Chicago on October 31 (with trivia!)